Why I write cheese books

Since I am in that limbo-land between the time of my book being finished — in terms of writing and editing – and the book actually being printed, I’ve been thinking about why I write cheese books.

I am more of a brooder than a quick, witty retort kind of guy. I like to mull things over for awhile, ask questions, read things… and for me the most effective way of thinking things through is to try and write about them. True, some half baked thoughts, missteps, dead ends and embarrassments may come first (in 2015 we usually call these “facebook posts.”) But eventually – at least I hope – coherency emerges, thoughts crystalize, I can start to say something that makes sense.

While I suppose I am a professional writer – I’ve sold two books (once twice) and numerous articles – it is not my main source of income. That gives me a lot of latitude with what I choose to write. Very, very early on with
Cheesemonger — only about 50 draft pages done — I sent it to an agent (not my current agent) because of a personal connection. I wasn’t really ready, and I should have waited, but the response I got was telling. Basically, if I would remove all the monger stories the agent would possibly be willing to sell it as a photo-based coffee table book.

That’s cool. Heck, it probably would have been more profitable. But it’s not why I was writing. My cheese writing “career” started by accident. I had a LiveJournal* and only sporadically mentioned my day job. However, I realized than whenever I would make a cheese post, my comments section would explode. One day I made the mistake of asking if people had any cheese questions. Within about a half hour I had more than 50 questions. I couldn’t handle it. I didn’t have the time to answer all those! I deleted the post.

But this outpouring of cheese questions showed me that there was need for more cheese writing. This was 2003 or so. There weren’t many cheese books back then. Indeed, I remember actually knowing the release dates and going to the book store to buy multiple copies of books by Steve Jenkins, Janet Fletcher, and Laura Werlin when they came out. It was tradition in our department that when someone found a new cheese book they would buy as many as they could and donate one to the department and then share them with everybody else. Even with these books though, there was still a thirst for cheese knowledge online. I started writing some LJ posts for fun and to learn more. I sought to answer the questions I was continually being asked, and I craved having a longer conversation about cheese than was usually possible over the cheese counter.

Surprisingly, and this is why Cheesemonger was written the way it was, I also found there was almost as much interest in the job as the cheese. Relaying the workplace realities of someone working 40-some hours a week with cheese was my point: the conversations, the stories, the ironies, the compromises, and putting realities to the mysteries of cheese — not just the specific factoids and statistics that others could provide (and that might be out of date within a year or two) — made writing the book interesting.

I was taken aback when Cheesemonger came out and I found out that wasn’t the way a lot of people write. In the food world especially, I was asked more than once how I went about hiring a ghostwriter.** It seems there is a non-insignificant minority of “readers” who think you would only “write” a book in order to brand yourself. I was just happy someone wanted to publish it. 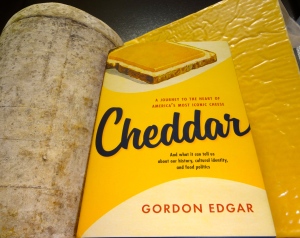 Fast forward to the last few years. The cheese world has changed a lot. So has the internet. You can actually find reasonably good information on most cheeses online if you know where to look. So many readable, yet technical, books exist now*** that I am absolutely relieved of any responsibility to write at great length about the technical details of cheesemaking. Best of all, people started using the word cheesemonger unironically!

On a road trip with the smartest person I know (my wife Laurie), we started talking about cheese and I realized that there was another cheese mystery I wanted to unravel. Why, when I started working in cheese in 1994, was American-made cheese the object of ridicule? I knew that there had been regional traditions of cheesemaking and long time cheese families. Why did they make the cheeses they do? Why did people who wanted fancy cheese demand imports? Why couldn’t Americans produce cheese as good as the Europeans? Is liking fancy cheese just too snobby for the regular American?

So many questions… I realized that the key to understanding American cheese would be understanding cheddar, America’s most popular cheese for 150 years. Cheddar lead to the industrialization of cheese, it took women out of the make-rooms, and it is beloved just about everywhere in this country in one or more of its many forms: the traditional cloth-bound wheel, the plastic-sealed block, or processed, emulsified, “American” single.

And then I spent a couple of years, working on this idea, on and off. Reading and visiting. Chatting and interviewing. Writing and deleting. And after awhile I realized that not only was cheddar important for the reasons mentioned above, but cheddar also helped usher back in the cheese renaissance we are currently enjoying and which will forever change the reputation of American-made cheese. Good idea Laurie!

There’s a lot more than that in Cheddar (the book) – cheese road trip stories, tasting notes, cheddar factory poetry – but it started because I realized that even though I have worked with cheese for most of my adult life, I didn’t know enough about the most important cheese in the country. I also feel that writing is, in many ways, my duty. I am rooted in the realities of the co-op in which I work and the city in which I live. In a country that can be very divided along rural/urban lines I am lucky that my job gives me the opportunity to interact with people who live in very different places. If I am going to sell cheese from these places — which is where food comes from after all – I also feel the need to add what I can to the complexity of the issues and not just participate in trendy consumer shorthand that comes easily – and can sometimes take over – in a busy, urban grocery environment.

Writing is my offering back to the cheese community that has nourished me in many ways. Writing is about answering my own questions while hoping those questions are interesting to others. Writing is my attempt to have a longer conversation than is possible over the cheese counter during the realities of a retail interaction. This is why I write cheese books.

*LiveJournal was a community-based, semi-private, blogging platform that was state-of-the-art, pre-facebook.
**Now, none of these people had read my book. I assume they just looked at me and decided I couldn’t write one and must have hired someone. I consider this a slight against the honorable profession of ghost-writing. How did they know my book wasn’t terrible?
***Max McCallman/David Gibbons, Gianaclis Caldwell, Paul Kindstedt, etc. just to name a few authors, all with multiple books.

This entry was posted in Uncategorized and tagged cheddar, cheddar - the book, cheesemonger, writing. Bookmark the permalink.

2 responses to “Why I write cheese books”