I know this is a public post on my website but really I am doing this series old-internet style: Basically, it’s my diary so that I can look back and remember this trip years down the line. But hey, there are pictures for you!

Except at Fiandino, which was the next stop on our trip. No pictures allowed! Le Fattorio Fiandino specializes in thistle rennet cheeses – including a Grana (Gran Kinara). The Fiandino family has actually been making cheese since the late 1700s, which they say may make them the oldest family cheesemaking company in Italy. The also make the Lou Bergier which we’ve carried on and off for years. Sometimes too subtle for the American market it’s a great, mellow, grassy, milky cheese probably most comparable, taste-wise, to a young Tomme Crayeuse.

Oh, I took a picture at their store.  That should be ok. 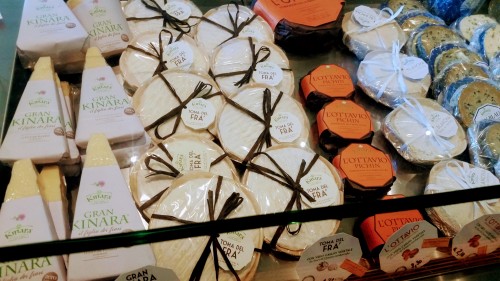 The next cheese place we went was Quattro Portoni. I was super excited to visit because 1. Water buffalo! And 2. Casatica, the bloomy-rind buffalo cheese I love so much. While we sell a ton of water buffalo mozzarella, especially in tomato season, probably the most requested cheese in the last few years is “anything with buffalo milk that is not mozzarella.” Quattro Portoni has that for sure.

And just look at these beautiful beasts!

Look at that beautiful cheese!

Some of the cheese even looked like artistic loaves of bread:

When I think of water buffalo cheese, I usually think, “luscious.”  Not Jesse Luscious from Blatz, but luscious like the richest, milkiest, grassiest cheese that just melts on your tongue like a chocolate truffle. There are exceptions to this of course, there are more and more styles of cheese made with buffalo milk and many of those don’t lend themselves to that kind of description (another water buffalo cheese I tried as a work in progress elsewhere was described to me as, “a struggle in the mouth”) but the Quattro Portoni Casatica meets those high demands.  And their (Taleggio-style) Quadrello di Bufala is all that with an extra kick of pungent.

On this stop of the trip, the full beauty of cheese and animals were on display.  I didn’t want to leave.

I should note that this trip was made possible by Michele Buster at Forever Cheese and Brad Dube at Food Matters Again. Ethics require me to say that you should take everything written here with a grain of salt since they took me on the trip. Of course, I also carried these cheeses for decades without getting a trip to Italy so keep that in mind too.

This entry was posted in Uncategorized. Bookmark the permalink.